For questions about the Confederate Corps, please email him at tremor1863@yahoo.com

The Confederate Forces were composed of infantry, cavalry, artillery and other units. Even more decentralized than the North, the South had no standing army at the outbreak of the War, and was much more reliant on the State governments for troops.

In the NCWA, the Confederate Army is represented by: 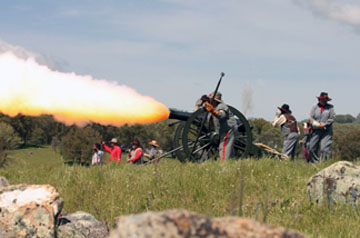 Organized in 1828 as a militia unit and called the “blues” for their original blue uniforms, the Norfolk Light Artillery Blues soon changed to Confederate gray, but retained the name. They were also known as Grandy’s Battery for their commander, Captain Charles Grandy. NLAB supported units in both the famous A.P. Hill Light Division as well as General Longstreet’s division, and fought in virtually every major engagement in Lee’s Army of Northern Virginia during the Civil War. They fought at Fredericksburg, Chancellorsville, Gettysburg, the Wilderness, the siege of Petersburg, and finally, Appomattox. They did not lose a single man to desertion through the entire course of the war. As one of the few military units that actually increased in size during the war, NLAB welcomes new recruits.

The James River Squadron had the primary task of defending the Confederate Capital of Richmond from Union attack via the James River.

Our Squadron portrays the crew of the ironclad, C.S.S. Richmond, as sailors or Marines as they participate in land operations with the Army of Northern Virginia.

We are trained in artillery and skirmishing, which gives us a unique advantage over other units. Where an infantry unit can only do what the infantry does, and an artillery unit can only do what an artillery unit does, the JRS can portray artillery for one battle and then deploy as skirmishers with the Army in the next battle. Variety is the spice of our life. Like other Confederate units, we often display an array of uniforms and weapons, accurately portraying our resourceful ability to provision ourselves in an arena where supplies were often nonexistent.

Representing the Confederate Navy, these Sailors and Marines, all experienced artillery gunners, show how troops were brought to the battle from any quarter to defend the Bonnie Blue Flag.

This company was formed in 1859 as a militia unit called the Caroline Light Dragoons. Upon the outbreak of war, the unit was mustered into the Confederate service on May 6, 1861, and served mostly on courier duty as an independent company. On December 18, 1861 the 9th regiment of Virginia Cavalry was formed, and the Caroline County troop was designated as Company B. 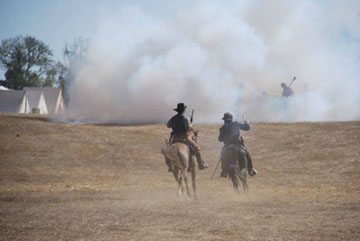 The 9th’s Colonel, Rooney Lee, began training the new regiment and whipped them into the disciplined, hard riding, fighting unit they became known as. One Yankee general said,  “…if he knew he was facing the 9th, he always put three Union regiments to oppose these southern horsemen.”  This regiment fought in about 150 engagements throughout the war and acquired the reputation of being generally considered “the best cavalry regiment in the Army of Northern Virginia.”

The NCWA’s 9th Virginia makes a dedicated effort to honor and portray those southern cavaliers. We are a family oriented group, with both mounted and dismounted platoons and a camp usually full of troopers, their families, friends and horses. Folks who love the Cavalry or just a real good bunch of people are always welcome in our camp. Whether you have horses or not, the 9th Cavalry is a great unit to be with!

We portray an 1863 Impression with uniforms and equipment, and a bivouac camp where it would be possible for the families of the troops to visit. Through much of 1863 the 9th’s brigade was camped off and on at a farm near Culpepper, Virginia, less than thirty miles from their homes.

So, if you enjoy the real feel of an old fashion camp, full of wood smoke, picket lines full of horses, tents, saddles and cavalry impedimentia, then this could be the unit for you! 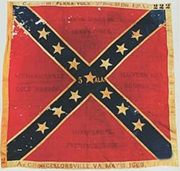 Four companies of Alabama infantrymen were brought together in 1861 to form this battalion. By 1863 there were three left. Losing commanding officers in nearly every major engagement that the 5th fought in through Gettysburg, these soldiers from Alabama were obviously fighters.

Though decimated, the 5th served the remainder of the war following Gettysburg as the 3rd Corp’s provost guard and was assigned to Lt. General A. P. Hill’s headquarters. In this role they participated in the battles of the Wilderness, Spotsylvania, Cold Harbor and the Siege of Petersburg.

After the death of A.P. Hill, the 5th marched with the rest of Lee’s army and participated in several rearguard actions during the Appomattox Campaign, finally surrendering with the rest of the army on April 9th, 1865.

We of the NCWA’s 5th Alabama welcome any and all who would like to honor those valiant soldiers of the Deep South, and participate in a really great camp life experience. All are welcome.

The Confederate government appropriated money for hospitals to serve the army at the beginning of the war, and the development of field services began after the First Battle of Manassas. 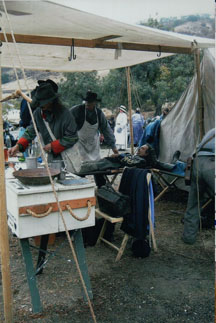 Initially, as a result of their lack of field hospitals and limited capacity in their general hospitals, the Confederacy employed a policy of furloughing wounded soldiers to return home for recovery. In August 1861, the army began the construction of new larger hospitals in several southern cities and the furloughing policy was gradually halted. The earliest surgeons were required to bring their own supplies, a practice that was ended in 1862. The government began providing each regiment with a pack with medical supplies, including medicines and surgical instruments. However, the Confederacy had limited access to medicinal supplies and relied on their blockade-running ships to import needed medicines from Europe, or on supplies captured or smuggled in from the North. Field hospitals were set up at the regimental level and located in an open area behind the lines  and staffed by two surgeons. It was the responsibility of the regimental surgeons to determine which soldiers could return to duty and which should be sent to the general hospitals. There were no intermediary hospitals, and each regiment was responsible for transporting its wounded to the nearest rail depot, where the injured were transported to the general hospitals for longer term care. In some of the lengthier battles, buildings were seized to serve as a temporary secondary hospital at a divisional level where the severely wounded could be held. The secondary facilities were staffed by the regimental surgeons, who pooled their resources to care for the wounded and were overseen by a divisional surgeon.

The 12th Virginia Volunteer Infantry Regiment was raised in central Virginia for service in the Confederate States Army, serving primarily with the Army of Northern Virginia.

The 12th  Virginia was organized at Norfolk, Virginia, in May, 1861, using the 4th Battalion Virginia Volunteers as its nucleus. Its members were from Petersburg, Richmond, Hicksford, and Norfolk. The regiment was assigned to General Mahone’s and Weisiger’s Brigade in the Army of Northern Virginia.

The 12th  participated in many conflicts from Seven Pines to Cold Harbor, then was involved in the Petersburg siege south of the James River and the Appomattox Campaign.

This unit totaled 691 effectives in June, 1862, and sustained 23 casualties at Oak Grove, 69 at Second Manassas, 39 during the Maryland Campaign, 1 at Fredericksburg, and 86 at Chancellorsville. Of the 348 engaged at Gettysburg, only four percent were disabled. It surrendered 12 officers and 177 men. The field officers were Colonels Everard M. Feild and David A. Weisiger; Lieutenant Colonels John R. Lewellen and Fielding L. Taylor; and Majors Edgar L. Brockett, Richard W. Jones, and John P. May.