He can be reached at outsdrs777@aol.com

In the NCWA the Union Army is represented by:

Mechanical engineer and inventor Hiram C. Berdan was a military officer in the Civil War and creator of the Sharpshooters’ regiment. Some of Berdan’s inventions included the Berdan rifle (a repeating rifle) and the Berdan center fire primer, a range finder torpedo boat for evading torpedo nets. Berdan was an amateur champion marksman before the civil war, and it was Berdan’s interest in rifles and shooting that led him to the idea of creating a regiment comprised of men who all had notable shooting skills. On November 30, 1861, Berdan was named colonel of both the1st and 2nd Sharpshooter regiments. The green uniforms that they wore were an early version of camouflage.

The Sharpshooters’ mission during battle was to kill enemy targets of importance (i.e., officers and NCOs) at long range. During their service, they fought in every Eastern battle up until the autumn of 1864. During their tour, the Sharpshooters were noted for efficient service in the battles of Yorktown, Gettysburg, Vicksburg, Chattanooga, Atlanta, Spotsylvania and Petersburg. One of the members, Lieutenant Colonel William Y. W. Ripley, received the Medal of Honor for his heroism as second in command of the 1st U.S. Sharpshooters at the Battle of Malvern Hill. After serving for three years, Berdan resigned his position as colonel on November 30, 1864, in order to return to his life as a mechanical engineer and inventor. The 1st and 2nd U.S. Sharpshooters were consolidated with other units on December 31, 1864.

The 7th Virginia (Union) Infantry was formed during the summer of 1861. Recruits were primarily from the western counties of Virginia, an area in which pro Union sympathies ran high; though many recruits came from neighboring Ohio and Pennsylvania. They saw their first action guarding the B&O railroad from Confederate incursions in the autumn of 1861.

By the summer of 1862 they had joined the Army of the Potomac in the Eastern Theater of the war and were involved in their first major engagement at the Battle of Antietam on September 17th 1862. While fighting to take the famous Sunken Lane, the 7th lost nearly 1/3 of their fighting men. It was during this action that they, along with the 14th Indiana and 8thOhio, became known as the Gibraltar Brigade for their stubborn fighting and never-give-up attitude. After the carnage and butchery of Antietam, the 7th was ever after dubbed “The Bloody 7th”.

In December of that year, the famed Gibraltar Brigade was the first Union Brigade to assault the wall on Marye’s Heights at the Battle of Fredricksburg, with great loss. This hard fighting and tenacity became  their hallmark throughout the rest of the war. The 7th was present at most major battles of the Eastern Theater from Antietam to Lee’s Surrender at Appomattox, including Chancellorsville, Gettysburg, Spottsylvania Courthouse, and Cold Harbor. When West Virginia was admitted as a State, in June of 1863, the regiment was renamed the 7th West Virginia Volunteer Infantry. By the end of the war, less than 300 of the original 1000 men mustered remained. Though they never gained the fame nor the recognition of other, more celebrated units of the Army of the Potomac, theirs is a legacy of courage and sacrifice equaled by few and second to none.

Our goal is to accurately represent these forgotten American heroes by portraying them in a way that is historically consistent, and by doing so to honor their memory and sacrifice. The 7th was not a flashy high profile unit, but rather a line infantry unit. We seek to represent the average soldier without whom the war could not have been won. Men like these formed the backbone of the Union Army, an impression which many of us feel is sorely lacking in today’s reenacting environment. As a unit we are focused on improving the overall authenticity of our historical impressions and experiences and are open to all levels willing to progress towards this goal. To that end we have loaner gear available to interested entry-level members, along with programs to help acquire the equipment to meet these goals. If this appeals to you, then let us welcome you into our family: The Bloody 7th. 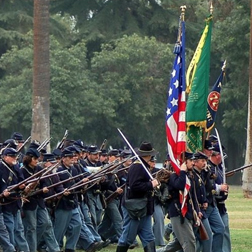 We are the 69th New York State Volunteer Infantry, Company “A,” a living history group that portrays life in the Army of the Potomac during the American Civil War. With carefully researched uniforms and equipment, historically accurate living history activities, and authentic camps and battles, members of the 69th NYSV commemorate those who fought and died during this great American tragedy.

The unit we portray was the first company of the first regiment of the famed Irish Brigade. The 69th NYSV was raised primarily in Brooklyn in the Fall of 1861. Its members were mostly first and second generation Irish immigrants, many of whom had fought with the 69th New York State Militia at the Battle of Bull Run. The 69th fought in many engagements, including Fair Oaks, Gaines’ Mill, Malvern Hill, Antietam, Fredericksburg, Chancellorsville, and Gettysburg.

The 69th, and other Irish Brigade regiments, can often be identified by their distinctive green flags. The original flags were made by Tiffany & Co. and were presented to each unit of the Brigade by the people of the city of New York. The flags were emblazoned with each unit’s battle honors, along with an Irish harp and the brigade motto, on a field of brilliant green silk. The Irish regiment with a bright green flag flying in front of it could always be recognized on the field. Additionally, the 69th NY was known in part for its famous war cry, the “vaugh a ballaugh”, which is an anglicization of the Irish phrase, fág an bealach, meaning “clear the way!”

Today’s 69th New York, Company “A,” is a unit of the Federal Brigade in the National Civil War Association, based in and around the San Francisco Bay Area.

Our members come from all over Northern California, and even as far away as Nevada, Oregon, and Hawaii. Everyone is welcome. Our goal is to educate members of the public through authentic historical recreation, while maintaining an enjoyable atmosphere, and providing opportunities for all family members to participate in the process of creating living history.

Formed by recent emigres to California that returned to their home state of Pennsylvania to fight for the Union, the 71st Pennsylvania formed part of the famous Philadelphia Brigade. The regiment participated in the 1862 Peninsula Campaign, and later in Second Bull Run and Chantilly. At Antietam, the 71st lost one third of its men, and also suffered heavy losses at Fredericksburg. They were positioned on Cemetery Ridge at the battle of Gettysburg, where they were almost routed by Pickett’s Charge, but rallied and pushed the Confederates back from the Angle, the “High Water Mark of the Confederacy.” The 71st went on to fight at the Wilderness, Spotsylvania, and Cold Harbor.

Headquartered at the Presidio of San Francisco at the outbreak of the War, Lincoln had this “regular army” unit moved east for the war effort.

Many patriotic young men on the West Coast were anxious for a chance to join in the fight. However, they knew that if they joined a California unit they would be stationed in the West—fighting Indians, guarding wagon trains, or doing garrison duty. And so, in the late summer of 1862, a group of Californians, raised one hundred volunteers to form a separate company in a cavalry regiment that was being raised in Massachusetts. Officially they became Company “A” of the 2nd Massachusetts Cavalry, but they were more popularly known as the “California Hundred”. The California 100 fought with distinction in the battles of Winchester, Luray, Fisher’s Hill and Cedar Creek. They were part of the long march from the Shenandoah to Petersburg in February and March of 1865 and later participated in the battles of Dinwiddie Court House, Five Forks and Sailors Creek. At war’s end they were present at the surrender of Lee at Appomattox Court House. They took part in the Grand Review at Washington, D.C. on May 23, 1865.

We represent the ONLY Californians who fought as a distinctly identified unit in the Eastern Theater of the Civil War.  One of the three battalions of the 2nd Massachusetts Cavalry Regiment were all Californians, and Company A, the California 100, was the first company to be mustered.

Our “impression” is cavalry fighting dismounted.  Which means we don’t have horses.  Otherwise, we are armed and uniformed as Union cavalry, and we work closely with the 7th Michigan Cavalry, which is mounted.  In camp, we and the Michigan boys are usually close together. We fight on foot as skirmishers, in open order—we move quickly and hit the enemy hard.

We welcome everyone to our club.  No matter your age or physical ability, we still would like you to check us out.  We are family oriented, and we are NOT “hard core.” Also, we have plenty of loaner gear, and can initially uniform and equip you if you want to try reenacting with us.

“Get ready to fight like devils, boys, they are Californians!”—Remark reportedly made by Confederate Colonel John S. Mosby, upon seeing his opponents were the CAL 100, not Pennsylvania cavalry.